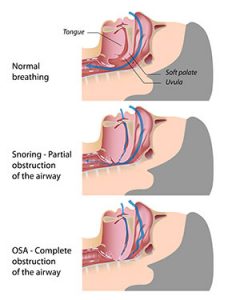 What are the symptoms of sleep apnea?

The most commonly recognized symptom of sleep apnea is snoring during the night. While snoring can be mildly annoying or even humorous, other implications can be much more serious. During sleep apnea, there is often an interruption in sleep patterns due to obstruction of the airway. This variety is called obstructive sleep apnea. Typically people who suffer from the condition have no idea, except that may have been told they snore by friends and family. They also may recognize that they are unusually tired, even after having had a full night’s sleep.

The reason for the fatigue is the interruption in sleep pattern, which is especially stressful for both the body and mind. The individual never truly gets the restful sleep to “recharge.”

What are the causes?

The primary cause of the condition is the position of the jaw and surrounding soft tissues of the throat. Snoring occurs as the throat sags backward and obstructs the airways. This may even result in breathing stoppages up to 30 or more times per hour during the night. This condition is especially stressful on the body and can have other health implications for the individual. Studies have shown that untreated sleep apnea is related to obesity, high blood pressure (hypertension), and increased risk for heart attacks and stroke.

Losing weight has been shown to help improve the condition, as well as CPAP devices, or adjustments to your sleeping position.

Another solution may be as simple as an oral appliance to assist you during the night. Often called a nightguard or snore guard, we can create a custom-fitted dental mouthpiece to prevent snoring and breathing problems. Molded to your teeth, it works by holding your lower jaw slightly forward, preventing the throat from becoming obstructed.

If you or a family member experiences the symptoms of obstruction and breathing cessation, a snore guard or nightguard is an idea worth considering! Contact us for a consultation by calling (916) 483-5900.