Bacteria That Cause Cavities

By Dr. William J. Black on September 6, 2022 in Patient Education 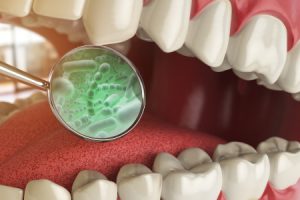 Looking Inside Your Mouth

You probably know that bacteria in your mouth cause cavities, plaque, and tooth decay. And you also probably know that proper at-home care such as brushing and flossing is the best way to prevent cavities and more serious problems. (Combine with regular dental check-ups and professional cleanings for best results!)

However, most species of bacteria are relatively harmless to our oral health; just one or two strains cause cavities and tooth decay. They are called Streptococcus mutans and Streptococcus sobrinus. Although they include the phrase “strep” in their name, these are not the same bacteria that cause strep throat. (They simply belong to the same family.) Instead of triggering a physical ailment with an immune response, S. mutans and S. sobrinus thrive on sugar (sucrose) in our diet. They ingest this sugar and produce acid. This acid creates a sticky film called plaque, dissolves tooth enamel, and encourages cavities and decay.

It’s important to remember that although these bacteria are not a traditional disease, they are still “catchy” and can transfer from mouth to mouth. That is one reason why it’s so important to never share toothbrushes, even amongst close friends and family.

Especially regarding young children, the most common source of the bacteria transfer is from a parent. Sharing each other’s food, temperature testing a baby’s bottle, or even a loving kiss all can potentially transfer bacteria. While it’s most likely inevitable that a child will become host to these cavity-causing agents, it’s advisable to limit their exposure as much as possible.