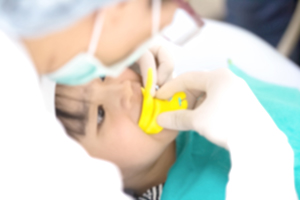 Fluoride plays an important role in the development of children’s teeth.

Fluoride is often found naturally in water, soil, air, and many foods. It is absorbed easily into tooth enamel, especially in the growing teeth of children from 6 months to 16 years old. Once teeth are fully developed, fluoride makes them more resistant to decay by promoting remineralization. This process replaces the lost tooth structure before the damage is even visible!

Many cities add fluoride to public drinking water as a source of dietary, or “systemic” fluoride. The fluoride is absorbed through the gastrointestinal tract and distributed throughout the entire body. Most fluoride is deposited in bones and hard tissues like teeth.

Fluoride can also be applied directly to the tooth surface (known as “topical” fluoride) with things like toothpaste, mouth rinses, and in-office treatments. Since fluoride is so important to developing teeth we typically recommend a fluoride treatment during your child’s regular checkup. it’s as simple as placing the fluoride gel into a tray and covering the teeth for about 4 minutes.

For dental checkups, cleanings, and fluoride treatments in Sacramento, California, call Diamond Dental of Sacramento at (916) 483-5900.